All the below links and excerpts (incl pictures) are in English.

The New Trans-Pacific Partnership: Smaller, but Just as Ambitious (PDF; 16/03/2018) | Desjardins You can check out the below two pictures: GRAPH 3, 4, and TABLE 2.
GRAPH 3 Share of CPTPP members in Canadian goods export and import categories
TABLE 1 Variation in Canadian exports by 2040 in relation to the base scenario according to various CPTPP scenarios
GRAPH 4 Highest tariffs in the 25 biggest categories of exports to the CPTPP
TABLE 2 Japan, Malaysia and Vietnam would be Canada’s biggest opportunity for saving on tariffs
GRAPH 5 Some products could be especially impacted by the CPTPP 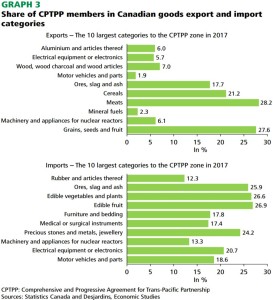 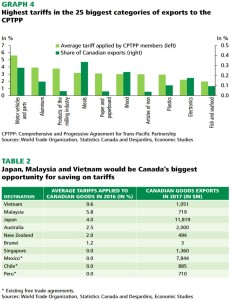