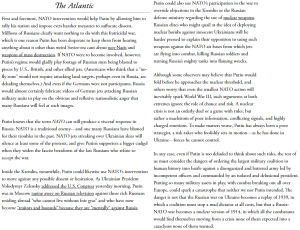 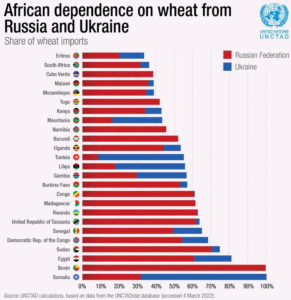 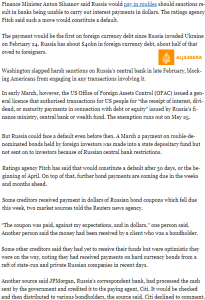 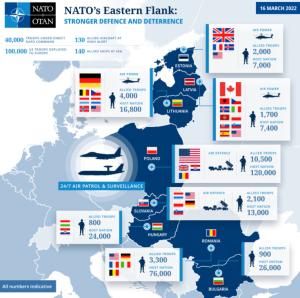 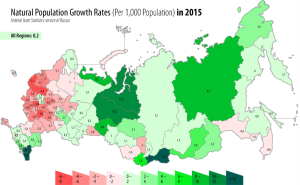 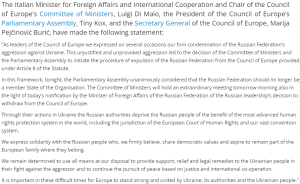 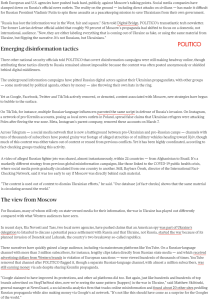 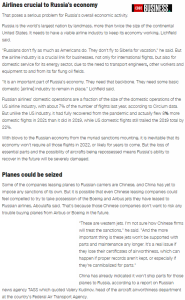 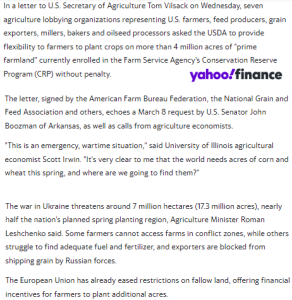 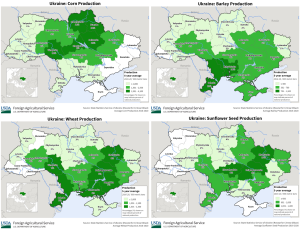 🇺🇦 #Ukraine has started exporting grain to #Europe by train.

The first consignments of several thousand tons of corn have already been exported across Ukraine's western land border since Ukraine's seaports remain blocked due to the Russian invasion. pic.twitter.com/AnPQSA5VFB

Spain is set to authorize emergency purchases of corn from the U.S. and Argentina as war intensifies in Ukraine. #cornimports #UScorn #animalfeedhttps://t.co/SqlpAtICKR

Thank you @ElenaNeroba for posting this Mar 18 article to the Elevatorist site.

She notes 1/2 of Ukraine’s #corn production area is occupied by Russia. Take time to read the full post. It is very informative.

#BRICS stick to their own narrative. Example: “Strong demand and the West's hybrid war against Russia have driven international corn prices to their highest levels since 2012, attracting the attention of Brazilian exporters.” https://t.co/q81gCWneGe

Ukraine's Corn Harvest May Plunge By A Third, Estimates Show
Estimates are now 50%, millions of Africans will be starving will be migrating north for food.
Replace every elected leader D's & R's who aided in this crisis. https://t.co/ujUlZPWVNH

🇺🇦 #Ukraine has sown 150,000 hectares of spring crops thus far. Spring crop area could fall to 7M hectares from the 15M expected before the invasion.

Ukraine has lifted export license requirements for #corn & #sunoil on Friday, saying stocks are high and no limits are needed. pic.twitter.com/UTNHSXkBK6

Chad Hart was interviewed by WHO Radio about how it will affect Iowa farmers if Ukraine is unable to grow corn this year. https://t.co/Dacy5HD2j5

China would greatly benefit if Russia wins the war in Ukraine.

“Ukraine, too, is a major wheat exporter, and has recently emerged as a corn powerhouse, too, supplying China and its booming meat industry with nearly a third of its feed corn imports.”
https://t.co/tQMhxwt7bd

Ukraine is the world’s 4th and 5th largest exporter of corn and wheat, and 85% of its crop exports travel by sea. With ports closed, the country is trying to shift some exports through its Western borders via trains, adding 10% to 15% to the cost of crops. https://t.co/zqdJVC3Rw0

#Ukraine is provided with food until the end of 2023.

The deputy head of the presidential office, Rostislav Shurma, said: "Today there are enough reserves of wheat, corn, sunflower oil and basic products in warehouses for 3-5 years. We will definitely feed ourselves". pic.twitter.com/1kMZNhRozI

#Ukraine has 5 railway border crossing stations with EU type rail coming to inside of Ukrainian territory.
Mobile transhipment ports are setting up now.
Ukrainian #corn is coming to the market… and yes we don’t know what is max capacity… yet#uagrains pic.twitter.com/uIGq8EoMMe

"The war in Ukraine means that fields are not getting planted, and Ukraine supplies much of the world’s grains…. We are able to take steps to buffer global food supplies against this risk, most notably suspending corn-based ethanol production."https://t.co/wHcZiSBWZR

Very good podcast ep on the serious supply shock risks in world grain and fertilizer markets exacerbated by the invasion of Ukraine, which is a major exporter of wheat and corn. More inflationary pressures. @ScottIrwinUI ⁦@TheStalwart⁩ https://t.co/T2ejfBwHGw

In 2021/22 #Ukraine is estimated to produce 42mt of corn, and expectations were for exports to total 33.5mt. This would have left Ukraine making up around 17% of global export supply and taking the spot as the world’s fourth largest #corn exporter.  https://t.co/DZHaaotip8

Traders have exported the first supplies of Ukrainian corn to Europe by train as the country’s sea ports remain blocked due to the Russian invasion, APK-Inform agriculture consultancy said.https://t.co/sKifC8tRHu

How war in Ukraine fuels a food crisis in Africa

Wheat, corn, sunflower oil and fertilizer are among the products affected, along with oil, compounding the impact of political instability and drought https://t.co/9pLTEzbkZY via @scmpnews

Only 1% Ukrainian corn is produced in Donbas, Crimea, and a potential land bridge but 24% of Ukraine's wheat comes from those oblasts.

Another month of conflict will degrade both sides military capabilities/munitions stockage to stalemate. pic.twitter.com/cYFQQfVxSJ

The current #FoodCrisis both highlights the need for a green energy transition and food system change.

The #livestock sector uses around 61% of global corn and 20% of wheat—grains that nations in the #GlobalSouth urgently need to feed citizens directly.https://t.co/jFGc8bBVA3

UKRAINE & GLOBAL HUNGER: Putin’s invasion has put at risk exports of wheat, corn, sunflower oil and other foods from Russia and Ukraine that account for more than 10% of all calories traded globally. With @JenniferJJacobs & @josh_wingrove via @bpolitics https://t.co/5J7lL0XOh1

TRENDING: Sanctions imposed by the West on Russia have interrupted supplies of those critical inputs all over the world. Fertilizer is essential for maintaining high yields of corn, soy, rice, and wheat. https://t.co/rjtbo9EdJa

“The charts, as interpreted by Carley Garner, suggest that both wheat and corn prices are headed higher here. Maybe much higher," @JimCramer says. https://t.co/Xym187HDLM

Ukraine produces about 10% of the world's wheat, 14% of its corn, and half of its sunflower oil.

But as @jacobsoboroff found in Western Ukraine, all of that is now under threat because of the Russian invasion. https://t.co/mEK0DVHEmS

Russia’s war in Ukraine could have major consequences to the world’s food supply. Ukraine accounts for:
➡️12% of the world’s wheat exports
➡️13% of corn exports
➡️Roughly half of the world’s sunflower oil@jacobsoboroff reports from Ukraine’s farming front line outside of Lviv. pic.twitter.com/SvzMvGQ53r

Russia and Ukraine together cater to more than one-quarter of the global export of wheat, one-sixth of corn, one-third of barley, and about eighty percent of sunflower oil and sunflower-seed meal.#RussiaUkraineCrisis #oilprice #recession @Abidsuleri @vaqarahmed @SDPIPakistan pic.twitter.com/yKg1kbMZHG

➡ #Corn and #wheat futures prices skyrocketed so much that many members of the complex grain handling chain get worried. Farmers in fear.#commodity #ukraine #trader #trading #market #investrohttps://t.co/0238AZrB80 pic.twitter.com/jyes3jeFb2

The Egyptian government is taking steps to fight price increases of basic commodities like wheat, oil, and corn, which have been much higher recently due to the war in Ukraine. https://t.co/INyEmqytBQ by @HagarHosny

Major wheat & corn-producer Ukraine was the breadbasket for many 3rd world countries in the mideast and asia.
— Egypt fixes price of bread as Putin's invasion of Ukraine sends wheat prices soaring.https://t.co/abeRjJNWm7

Food prices are already past levels that contributed to uprisings in the past, and the outbreak of a war between Russia and Ukraine — which combined account for 28% of global wheat exports and 16% of corn. pic.twitter.com/5qIhvXoQ69

The crises in Ukraine will impact wheat, barley, and corn, extending an already alarming hunger crisis in places like Afghanistan, w/ 22.8 million now facing acute hunger. The international community must not turn its back on vulnerable Afghans and others. https://t.co/zNHJziEW16

Analysts suggested the pressure on vegetable oil supplies from the war in #Ukraine along with drought-depleted crops in South America were supporting the surge in soybean markets. → https://t.co/7VqZIZGgJJ#agriculture #agribusiness #grain #soybeans #commodities #wheat #corn

With estimated #maize (#corn) arrivals of 16.9m t (up by 28% y/y), the EU will be the largest single import market in 2017/18, followed by Mexico and Japan. While most supplies were sourced from Ukraine, there were also unusually large purchases from Brazil and the USA. pic.twitter.com/tpTUzeMqwm

Blockade:“$6 billion worth of grain export, some 20 million tons of wheat and corn that Ukraine was looking to get out of the country.” https://t.co/OzHTul18Xr

Zelenskyy appeals to Japan for more sanctions against Russia https://t.co/TkvTZDSpSy

Zelenskyy appeals to Japan for more sanctions against Russiahttps://t.co/6KmNoPsEym pic.twitter.com/TgQJ7t6EQk

"Responsible nations must work together to protect peace."

Japan is the first Asian country to sanction Russia https://t.co/2cIPdJf44d

Zelenskyy's address came hours before PM Fumio Kishida was to leave for Brussels to join other leaders of the Group of Seven countries on the sidelines of an emergency NATO leaders' meeting.https://t.co/vBN6iYZuIk

Zelenskyy praised Japan during Wednesday's address for becoming the first Asian country to sanction Russia and asked Tokyo to go even further.https://t.co/mX4VuiVtFi

Zelenskyy praised Japan for becoming the first Asian country to sanction Russia and asked Tokyo to go even further. He said trade with Russia should be banned and that foreign companies should withdraw from the Ukrainian market.#Ukraine #Japan #Russiahttps://t.co/RIlBvsQ95d

Today, 🇺🇦President Zelenskyy delivered a speech to the Japanese Diet in which he thanked Japan for being the first Asian nation to act in solidarity with Ukraine by condemning Russia's aggression, launching sanctions and assisting the Ukrainian people.https://t.co/490uHCvRPv

Ukrainian President Volodymyr Zelenskyy urges Japan to maintain its sanctions against Russia during his online speech to the Diet.https://t.co/5CLTzX72yn

#VolodymyrZelensky to the Parliament of #Japan: "I am sure that Japan will be with us then – just as it is now. In our anti-war coalition. At this crucial time for all of us" https://t.co/LFQSoljQPZ

News Roundup: What Impact Will Zelenskyy’s Speech Have on Japan? https://t.co/1nTXO3qL6V