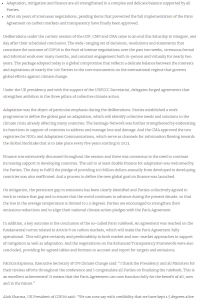 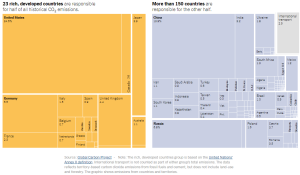 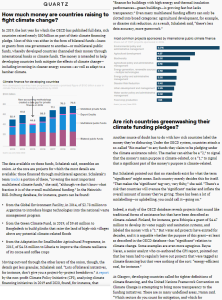 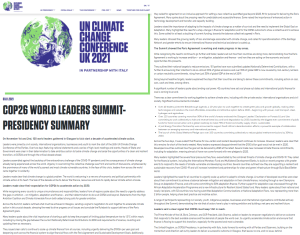 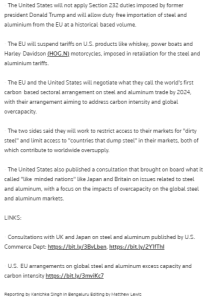 On November 11th, Minister Yamaguchi met with the U.S. Special Presidential @ClimateEnvoy John Kerry to exchange views during #COP26 in the U.K.. pic.twitter.com/fI01Exa6pC

On November 12th, Minister Yamaguchi met with Minister Pompili @barbarapompili of France’s Ministry of the Ecological Transition to exchange views during #COP26 in the U.K. pic.twitter.com/0NjqrvDRHC

On November 12th, Minister Yamaguchi met with Minister Svenja Schulze @SvenjaSchulze68 , Germany’s Minister of the Environment, Nature Conservation and Nuclear Safety during #COP26 in the U.K. They exchanged views on COP26 negotiations. pic.twitter.com/Mbeanwn6Xd

On November 12th, Minister Yamaguchi met with Minister Yasmine Fouad of Egypt’s Ministry of Environment @EGY_Environment to exchange views during #COP26 in the U.K. pic.twitter.com/ZTGJKbb43w

On November 11th, Minister Yamaguchi met with Minister Leite @joaquimleitemma , Brazil’s Minister of the Environment to exchange views during #COP26 in the U.K. pic.twitter.com/Ja5iL6ubdh

#JapanPavilion in #COP26, a seminar on Reconstruction and the efforts to #Decarbonazation of #Fukushima has been held. Thanks for having many participants from all over the world. We’ll continue to send out information about the efforts and the future of Fukushima to the world! pic.twitter.com/wdtOrEQOPF

#Climate-related disasters are displacing more and more #Somali people. @UNDP and @Japan are helping some get back on their feet with grants to set up new businesses. #COP26 #ClimateAction #SDG13 @JapanInKenya pic.twitter.com/FoY0Aun5wP

#COP26 successfully ended. Countries are to accelerate their efforts to tackle #ClimateCrisis , including by innovative means. Japan🇯🇵 will continue to lead such efforts, to save our 🌏.#climate https://t.co/yHMktIMuNu

We can't afford another year of the same old carbonisation. Thanks to India, Australia, Russia, Japan and a handful of other selfish bastards, we're going up beyond 420ppm and down the social-ecological pan. #CopOut26 #COP26 pic.twitter.com/DaC7ClOi91

By 2050, there's going to be triple the amount of AC units in the world.

That's equivalent to all the energy that the US, Japan and Europe use today.@EPGOxford are looking for new sustainable ways to keep the world cool without compromising the environment.#COP26 #TruePlanet pic.twitter.com/gxoc1vXyMp

"While 23 countries agreed in Glasgow to end coal, Japan is finding it hard to break its addiction to black gold."https://t.co/FRDS48sc2u

Sunday 14th November at 7.30pm As we enter an era of climate instability a lesson from Japan in resilience and compassion about re-establishing life in the aftermath of the the Fukoshima Tsunami and consequent nuclear disaster. #COP26 #ClimateAction https://t.co/GoRERYwjV4 pic.twitter.com/E1JF40Yb9t

COP 26: Day 11 – During #COP26, we’re highlighting our research exploring environmental change and peace. Today we’re comparing natural disasters in Haiti and Japan and the role Positive Peace plays in resilience and rebuilding after a disaster

"For adaptation to climate change, Japan will double our assistance to approximately $14.8 billion, such as in the area of disaster risk reduction," said Yutaka Shoda, Vice-Minister for Global Environmental Affairs, Japan at the #COP26 Ministerial Dialogue on #AdaptationAction. pic.twitter.com/LmsnKpWTlD

#COP26 side event “Toward Strengthening Transparency Activities by the Private Sectors” was held. H.E. Fu Minister of Sustainability and the Environment, Singapore and H.E. Yamaguchi Minister of the Environment, Japan made opening remarks and announced the launch of #PaSTI Phase2 pic.twitter.com/neMmf8vpWv

🍃 Subnational initiatives are essential to achieve a decarbonized society.

Join us at #COP26 to see how 🇯🇵 Japan has been contributing to #decarbonisation in #cities.

[LIVE NOW] Japan and the US are cooperating on accelerating the transition to decarbonization. Both countries recognize subnational action as key, and will collaborate even further to support them in their efforts. Join this event at #COP26 to learn more: https://t.co/zjnaeZYzAc pic.twitter.com/hCLos8Lwdi

More than 20 countries agreed to phase out coal power at #COP26 in Glasgow, but not Japan – a ‘leap backwards’ for a country that once led the way on the Kyoto Protocol to reduce greenhouse gas emissions https://t.co/MvgxYdXmhT pic.twitter.com/ndiDBASe5E

Japan, once a leader on climate, under fire for coal use at COP26 https://t.co/IZUBPJ367B pic.twitter.com/3mtdG83hhw

Rich countries, including the USA, #Canada, Japan & much of western Europe, account for 12% of the global pop’n but are responsible for 50% of all climate emissions released over the past 170 years. #cop26 #climatecrisis https://t.co/u9HJxQPSZw

#COP26 is ending, but Australia continues to take #ClimateActions
The Government🇦🇺 has released its Future Fuels and Vehicles Strategy.@Toyota_Aus has also worked on developments on charging/refuelling stations to expand the EV/Hydrogen vehicle market🚗 https://t.co/loNlL9adeQ

"It is going to go on fire or drown, but nobody is really doing anything,” Ringo Starr continued. “I’m not political, but Japan and Russia didn’t even turn up [at the ongoing COP26]." https://t.co/SLInAa2zKJ

A heavily forested Russian island north of Japan has become a testing ground for Moscow's efforts to reconcile its prized fossil fuel industry with the need to do something about climate change. #COP26 https://t.co/SqJKm1Wzo1

Japan, Others Fail to Agree Phasing Out Gasoline Cars at COP26 https://t.co/FjW5BJUcKR

#Hitachi is the lone Japanese corporation among #COP26 Partners, but it is in good company at the @UN Climate Conference in Glasgow with some of #Japan's other big names powering good toward a decarbonized society! https://t.co/MooQbhDTSk

Viewers say this Highlight Session at #HSIF2021 gave them a good understanding of global trends on #NetZero and #Sustainability efforts.

Watch and decide for yourself 👇https://t.co/DEbglXyGkT #COP26

Sadly as 'Toyota sneakily spreads anti-EV propaganda' (in schools!) – Japan earns the COP26 old fossil, wooden spoon, on the back of it. Tough read for ⁦@JAPANinUK⁩

Shipping routes for the transport of iron ore from Australia to Japan and containerized goods from East Asia to Europe are at the center of plans to slash maritime carbon emissions by 2030.https://t.co/cS44nR8fwz#container #shippingcontainer #COP26 #Greenshipping #Shipping

"Vietnam has also become a major producer, shipping mainly to Japan and South Korea. Vietnamese exports increased over 18 times from 2013 thru last year, with profits rising from $23 million to $351 million." https://t.co/q3tiysIzzc

“The world's largest auto markets, including the U.S., China, Germany, South Korea and Japan, were absent from the pledges, and the top two global automakers (Toyota and Volkswagen) also didn't sign.” https://t.co/qJ0ILqXv0Y

🇦🇺 Australia is one of the countries most vulnerable to climate change in developed world.

🇯🇵 46% of Japan's and 47% of Japan's industrial output are under threat from climate change.

Among positives at #COP26, still under way in Glasgow, electric vehicles have had a big boost. >100 entities including countries & automakers have pledged to transition to #EVs by 2040. Dampener: largest auto markets US, China, Japan haven't signed on https://t.co/xTmWY8nfF7 pic.twitter.com/hJOdHAvSnu

OECD countries should end coal by 2030 to align with 1.5 degrees. pic.twitter.com/XRVKl6XiG5

Some activists dressed as the Pokémon character Pikachu on energy day at #COP26. ⚡️

The group were protesting Japan's support for the coal industry.