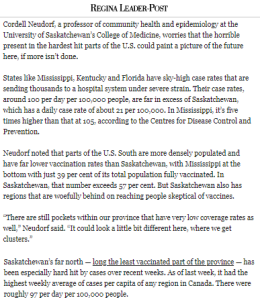 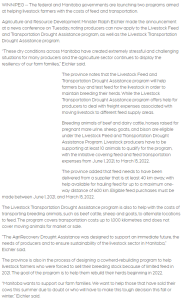 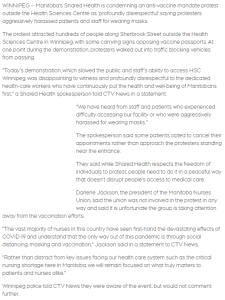 I’m proud to be kicking off our trade mission to Japan and South Korea.

Landed in Tokyo, Japan just half an hour ago, and team Saskatchewan is ready for our first event in the next hour with over 100 Saskatchewan and Japanese based businesses. pic.twitter.com/gnhgWLzJH5

The sky is clear here in Tokyo after #TyphoonHagibis swept through last night accompanied by a 5.7 magnitude earthquake. The Government of Saskatchewan delegation is safe and thankful for the hospitality of our Japanese hosts. pic.twitter.com/5Wzg2GUhXa

Saskatchewan has what the world wants and needs. In fact 68% of our products are exported around the globe.

As the global economy begins to recover, Saskatchewan has an incredible opportunity to supply the food, fuel and fertilizer the world needs through a safe, reliable supply chain. Our ongoing partnership with Japan is just one example. [1/2]https://t.co/d1oBnoAe70

Good luck to the six athletes from Saskatchewan competing in the 2020 Tokyo Olympics.

I know that you will be great representatives of our province as you fight to bring home the gold. pic.twitter.com/HyZk1eR4Ia

Great reception at @CanEmbJapan in Tokyo with Saskatchewan Premier @PremierScottMoe. Fantastic talks with two of my guests Chairman Nomura (CIEA) and Dr. Yamada (Anges). Special thanks to Ambassador Burney for hosting us. pic.twitter.com/bCJdFQLrzS

Japan was Saskatchewan’s third-largest agri-food export destination in 2020 with $1.2 billion in exports. Saskatchewan accounted for 85% of Japan’s durum wheat imports in 2020. pic.twitter.com/CoHd9sR5IM

Team Canada Seminar ( a full house) in Tokyo,Japan begins with opening remarks from the Hon. Lyle Stewart, Saskatchewan Minister of Agriculture. Japan is very happy about the excellent quality of our Canadian wheat this year. pic.twitter.com/SfLFuAGHS9

Joined ⁦@PremierScottMoe⁩ yesterday for a meeting with Shigenobu Kobayashi – Consul General of Japan based in Calgary. Valuable advice before heading out next week on our trade mission to Japan – an important trading partner for Saskatchewan. pic.twitter.com/Ob4l3Ug6iD

Thank you, Premier @PremierScottMoe, for the strategic exchange on trade, agriculture & energy, and recovery from the pandemic. We count on your leadership during these trying times, and we look forward to the continuous development of Japan-Saskatchewan/Canada relations. pic.twitter.com/yrqr6MvsGK

SK premier Scott Moe tells reporters in Regina he is thankful for the federal support; says it "does buy us some breathing space" to deal with the issue and he's hopefully Korea (and Japan) trip will be fruitful.

Number two of our new What Now? briefs expanding on Western provincial export opportunities in Japan. Saskatchewan is on deck today – here's how businesses and government can target the full range of new opportunities under the #CPTPPhttps://t.co/Z6BX3ixyRK pic.twitter.com/tTXnFDX33n

Simpson Seeds Inc is the exclusive supplier to Calbee, a Japanese company that just launch this red lentil snack. How cool is it that local Saskatchewan product is in there! #lentilsnacks #sasktachewantotheworld pic.twitter.com/6z6yUXa50r

Thanks to a unique program at #Usask that combines English as a Second Language and agricultural research, students from Iwate University from Japan are able to learn about Saskatchewan’s large scale agricultural practices https://t.co/7EoMUZrSc2 pic.twitter.com/iO1O5M4zRR

Today CBC Saskatchewan News at 6 host @sammaciag & @FionaOdlum welcomed over 60 students from Regina & Fujioka to our Broadcast Centre for a tour.https://t.co/tPaDB9BzPM pic.twitter.com/qFonQq82kk

Meet the lads from Saskatchewan travelling to Japan for the world snowball title: https://t.co/b9RWgLZ4Pw pic.twitter.com/TY0R2FIvdE

7 athletes with ties to Saskatchewan competing at Tokyo Olympics https://t.co/MaJ5LRdv1n

Saskatchewan Premier Scott Moe is sheltering in place in Tokyo as powerful Typhoon Hagibis hits city. Moe is part of a trade mission in Asia. https://t.co/cNZ5xi8FCm

Today on @prairiedlab – the powerful Japan-Manitoba connection. How two U of M architecture grads, one from Tokyo the other from Brandon, have built successful design careers in Japan. https://t.co/iEdhCEMEqU

We're celebrating the FIRST @edo_japan in Manitoba! So far it's been a HIT! Come see us at @CFPoloPark centre court to enter to win a $25 gift card and grab some coupons! pic.twitter.com/nz0N6fnrpF

#DYK? Manitoba’s HyLife exports Canada’s largest amount of pork to Japan, and it’s carried in 3,000+ stores in Japan! Read how exporting helped this company grow from 20 to 2,200 employees, and see how the @TCS_SDC and #CPTPP benefits #cdnbiz! https://t.co/BrDBi1JfdW pic.twitter.com/XlbeyTVwZ1

Thank you for your visit Mr. Shigenobu Kobayashi Consul-General of Japan. A great conversation on the future of trade between Japan and Manitoba. #mbpoli pic.twitter.com/2RN28WZ6vW

It was an honour to welcome His Excellency, Kimihiro Ishikane, Ambassador of Japan to Canada. Manitoba and Japan have well-established and strong ties and we hope to continue on a similar path in the future. pic.twitter.com/zV3c6yztVC

For 32 years York Benimaru Fondation #YBF2019 has partnered with #4HMB and #MBAg to provide Canadian experiences for 20 Japanese youth. The aim is to learn English and experience Manitoba life. Always fun to see life through our guests eyes. pic.twitter.com/cbHwz2ZnEl

It was great to meet with biologists from Japan yesterday who are in Manitoba for meetings on wildlife conservation. I hope you’ve enjoyed your visit to our beautiful province! Thanks @umanitoba for arranging. pic.twitter.com/6B2xvu0JbB

On March 6th, the 33rd Manitoba District Japanese Speech Contest was held online. Consul General Kobayashi made the opening remarks for this event. 11 people from each university in Manitoba participated, presenting speeches in Japanese on a variety of topics of their interest.✨ pic.twitter.com/v7QDYQdsGo

The @bizcouncilmb was please to host Ambassador Kimihiro Ishikane of Japan at a round table discussion on trade and opportunities between Manitoba & Japan. pic.twitter.com/mGZq6YXEsK

I am unable to read the signs but my hosts tell me that is is Manitoba Pork in the store in Japan. pic.twitter.com/3IbHX6Yopt

A terrific look at why securing a trade deal in the Asia Pacific region is of vital importance to Canada’s beef industry. TPP seen critical for beef sales growth in Japan | Manitoba Co-operator https://t.co/vujYhVJyqj

This week I’m at the #CDNBeefConf as the rep from Manitoba for @YCCbeef. Today sat on the Foreign Trade Committee. Lots to learn about. Japan has removed the under 30months of age restriction, and the tariffs have dropped from 38.5% to now be 26.6% thanks to CPTPP. #CDNBeef pic.twitter.com/tyzlKWXZIT

Expansion on its way for Canadian #pork integrator HyLife, writes @hsiemens. HyLife strongly expands in Manitoba, e.g. to be able to export to Japan and China. https://t.co/V3WmS1F18k pic.twitter.com/022hwlUd95

Asia is driving the future of animal protein…https://t.co/nwW9xwF6xM

DYK: 4-H Manitoba has an exchange program with Japan! Your family could host a Japanese exchange student for 2 weeks this summer. Check out this video and visit https://t.co/fc8ftkGpNB for more information.https://t.co/oSlAXPGFVZ

Thanks for representing Manitoba’s 6,500 beef producers. Glad to meet with @ManitobaBeef to discuss the stability & possibilities for #mbbeef with #USMCA and #CPTPP in place – including opportunities with access to #Japan. #mbpoli #cdnpoli #cdnag pic.twitter.com/9Ugowdx5JX

"I am proud to grow some of the best wheat in the world." Says Boris Michaleski from Manitoba Wheat and Barley Growers Association at the Japan 2019 New Crop Seminar. #CDNWHEAT19 @Cereals_Canada @Grain_Canada learn more about New Crop Missions here https://t.co/Di2WCFi5Ar pic.twitter.com/gSOcxPWPjG

Aomori City in northern Japan gets 312 inches of snow on average every winter. In comparison Manitoba only gets 44 inches on average. #snowfall #fridayfacts #japan #manitoba pic.twitter.com/K5jFHnknqC

I’m saddened to hear Ron Shephard, #BattleofKapyong veteran, has passed away. He was 1 of only 3 surviving Kapyong veterans in Manitoba. Ron was wounded at Kapyong and evacuated to a military hospital in Japan. He stayed in the military and retired as a warrant officer. 1/2 pic.twitter.com/9yKhWYWbHY

#Astana’s winters are as cold as the #Canadian #Prairies, but one doesn’t come here for the weather, writes Max Johnson from #Manitoba in his blog "Visiting Astana, Kazakhstan's Extraordinary Capital City". A team of global architects led by the Japanese master Kisho Kurokawa pic.twitter.com/cVSabbxjQo

At the gala dinner for the Japanese cultural assn of Manitoba celebrating 30 years since the redress was signed recognizing the wrongs made against the human rights of Japanese Canadians during WWII @japanesepavilion #apology https://t.co/Cv8HAj58FB pic.twitter.com/PCtMWGVS9L

During WWII, Canada's government forced 22,000 Japanese Canadians from their homes. Many were sent to internment camps, but some families were allowed to stay together by relocating to sugar beet farms in Manitoba. https://t.co/GfQve7dPfo #cbcdocs @cbcdocs pic.twitter.com/mt0swPz9Yg

Wolverine Days draws crowd of 2,500 "People attended over the two days, coming from near and far – all over Manitoba, Ontario, Saskatchewan, Brazil, Japan, New Zealand and even South Africa – Gun, archery and target reps from over 20 companies were onsite" https://t.co/VLAqGwawcU