COMPREHENSIVE AND PROGRESSIVE AGREEMENT FOR TRANS-PACIFIC PARTNERSHIP (TPP-11) – ANALYSIS OF REGULATORY IMPACT ON AUSTRALIA (PDF; 21/03/2018) | Parliament of Australia
PART 2: PROBLEM IDENTIFICATION
p3 Tariff barriers still faced by Australian exporters
15. With Japan, Australia has secured increased access for many products under the Japan-Australia Economic Partnership Agreement (JAEPA), but will continue to face high tariffs and quota-limited access on Japan’s sensitive products. In dairy, products face ad valorem tariffs ranging up to 40 per cent and specific tariffs up to \1,199/kg ($12.62/kg). Beef tariffs, while significantly reduced under JAEPA, would still be as high as 23.5 per cent after 15 years. Wheat and barley face tariffs of up to \50/kg ($0.58/kg) and \39/kg ($0.45/kg) respectively, rice is subject to a \341/ kg tariff ($3.93/kg) and sugar is subject to a levy on high polarity sugar of 103.10 yen/kg ($1.19-kg). A range of tariffs also remain on other Australian interests in horticulture and seafood.
19. Access into the Canadian dairy market is currently significantly limited by existing quota and high tariff arrangements. Canada’s quota access for dairy products is incredibly small – for example, 332 tonnes for yoghurt, 394 tonnes for cream and 3,274 tonne for butter (2,000 tonnes of which are allocated to New Zealand). While out-of-quota tariffs range up to 369 per cent. Outside of dairy, Canada also imposes tariffs of up to 94 per cent for barley products, and imposes tariffs of 1.87 c/litre for wine, and up to around 20 per cent on industrial products, which it has eliminated for its other FTA partners.
20. Mexico has tariffs of up to 67 per cent on wheat, 115.2 per cent on barley, 125 per cent on dairy, 25 per cent on beef, and 20 per cent on wine. On industrial products, Mexico’s tariffs can range from 15 to 30 per cent for automotive parts or mining equipment.
PART 5: IMPACT ANALYSIS
pp15-19 Table 3: Key agricultural market access outcomes for Australia
pp19-20 Resources, Energy and Manufactured Good
pp28-34 Suspension of TPP provisions in TPP-11
pp35-38 PART 6: TRADE IMPACT ASSESSMENT
p41 PART 9: IMPLEMENTATION AND REVIEW
113. A TPP-11 Commission established under the Agreement will be responsible for the operation of the TPP-11. The Commission will review the operation of the TPP-11 three years after entry into force of the Agreement and at least every five years thereafter. If the entry into force of the original TPP is imminent or if the original TPP is unlikely to enter into force, the Parties have agreed to, on the request of a Party, review the operation of the TPP-11 so as to consider any amendment to the Agreement and any related matters.
114. After the entry into force of the TPP-11, any state or separate customs territory may accede to the TPP-11 if it is prepared to comply with the provisions of the Agreement, other terms and conditions specified, and if all TPP-11 Parties agree to the accession.
115. Any Party may withdraw from the TPP-11 by providing written notice to the Depositary and other Parties. A withdrawal shall take effect six months after a Party provides written notification, unless the Parties agree on a different period.

JSCOT (Joint Standing Committee on Treaties) inquiry into the Comprehensive and Progressive Agreement for Trans-Pacific Partnership (TPP-11) (PDF; 04/20/2018) | Australian Chamber of Commerce and Industry
pp4-6 2 Increased red tape and costs:
… It is important to understand that each agreement includes compliance terms which need to be satisfied in order to take advantage of the agreement. In the case of goods trade, this is the tariff regime where rules of origin must be satisfied. Zero preferential tariffs are different to the abolition of tariffs. Any tariff, even 0, requires the importers to satisfy the compliance rules and so red tape is retained. …
5 Further comments:
pp8-16 Annex 1: Previous Parliamentary Inquiry recommendations and resultant actions.
pp17-19 Annex 2: Previous Submission to the Senate Foreign Affairs, Defence and Trade References Committee TPP Inquiry, October 2016
p22 6 Contribution to economic prosperity from liberalised trade
… Australia held similar positions in the 1950s but its ranking slipped over the following two and a half decades. It dropped to 15th in 1983 and again in 1991 and 1992.
Since then Australia’s international ranking has risen. This improvement has been linked to sustained economic reforms during the 1980s and 1990s, including: the opening up of trade and capital markets to competition; partial deregulation, commercialisation and privatisation of state owned enterprises; labour market reforms that reformed the centralized wage fixing system; and National Competition Policy reforms (PC 1999). These resulted in better utilisation of labour and capital by business and enabled the Australian economy to innovate, taking advantage of newly developed information and communication technologies.
pp38-39 9.2 Economic studies

Chile and the TPP Negotiations: Analysis of the economic and political impact (PDF; 05/2013) | ONG Derechos Digitales 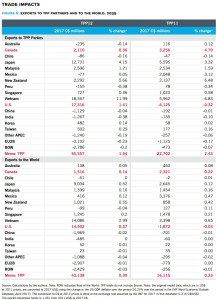 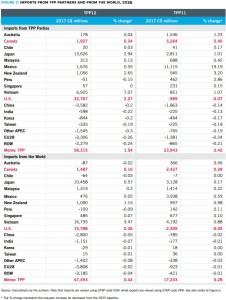 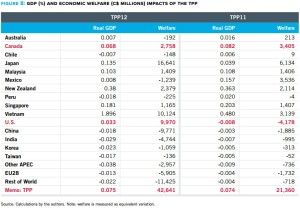 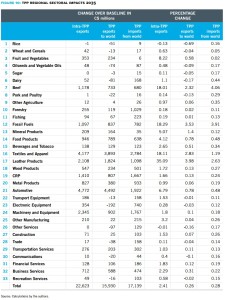 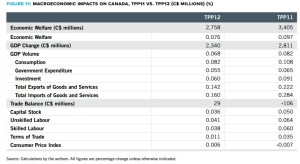