All the below links and excerpts are in English. 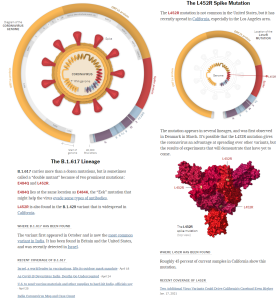 The COVID variant from India: What we know so far (27/04/2021) | @dwnews
… It’s too early to say whether the new variant of the virus, B.1.617, is responsible for the rapid increase in infections, but it is being treated as a possible cause.
What role do virus variants play?
In many other cases and countries, new variants have played a role when infections jumped.
Some experts are also concerned that the Indian variant may be turning into a type of “super mutation” that will continue to spread across the world. …
Why could the Indian variant become dangerous?
The Indian variant consists of two mutations on the spike protein of the virus.
A spike protein allows a virus to enter the body and infect it. The virus can then spread quickly through the body, if it escapes any antibodies in the immune system or those developed as a result of a vaccine – or, indeed, if there aren’t any antibodies.
Experts say there is a risk that people who have recovered from a COVID-19 infection, or those who have been vaccinated, may not be as resilient against this new variant as they may be against other forms of the virus.
What’s special about the Indian variant?
The mutations found in the Indian variant are identified as E484Q and L452 and are not entirely new. E484Q is similar to E484K – a mutation seen in the South African variant, B.1.353, and in the Brazilian variant, P1.
In some cases, the Indian mutations were detected in the British variant, B.1.1.7.
L452R is detected in a Californian variant of the virus, B.1.429. The same was found in a variant in Germany.
Of interest or of concern?
… Dr Jeffrey Barrett, director of the COVID-19 Genomics Initiative at the Wellcome Sanger Institute in the UK, has commented that the Indian variant has spread at such low levels over the past few months, and that makes it “likely not to be as transmissible as B.1.1.7.”

Researchers are investigating if a COVID-19 with multiple mutations found in India is more deadly and resistant to existing vaccines (04/23/2021) | @businessinsider
… The Times of India spoke to Vinod Scaria, a researcher at the CSIR-Institute of Genomics and Integrative Biology in India, who said the triple-mutant was also an “immune escape variant” – a strain that helps the virus attach to human cells and hide from the immune system. …
… Sreedhar Chinnaswamy, a researcher from the National Institute of Biomedical Genomics in India, told the Times of India that the variant also carried the E484K mutation, a characteristic found in the variants first identified in South Africa and Brazil.
“In other words, you may not be safe from this variant even if you were previously infected by another strain, or even if you have been vaccinated,” Chinnaswamy said.
Paul Tambyah, a professor of medicine at the National University of Singapore, said the good news is that there is no concrete evidence that the triple mutation is deadlier or more transmissible. …
“There is good data suggesting that the immune system, not just antibodies, can respond to multiple different mutants,” Tambyah said.
But this new threat is still worrying, as India’s healthcare system has already reached a breaking point as it grapples with the second wave of COVID cases. …

What’s the new coronavirus variant in India and how should it change their COVID-19 response? (06/04/2021) | @down2earthindia
… In 15-20 per cent of samples from the Indian state of Maharashtra (the state accounting for 62 per cent of cases in the country) a new, double mutation in key areas of the virus has been detected. These are now known as the E484Q and L452R mutations.
What makes the variant different?
… Given what we have seen with other similar mutations, it might also make it harder for our immune system to recognise the virus due to its slightly different shape. This means our immune system may not be able to recognise the virus as something it has to produce antibodies against.
Implications
… Mutations can result in 20 per cent more in-hospital deaths, as we witnessed during the second wave in South Africa. …

India’s ‘double mutation’ covid virus variant is worrying the world (19/04/2021) | @livemint
… The new variant, called B.1.617, was initially detected in India with two mutations — the E484Q and L452R. …
… Some mutations weaken the virus while others may make it stronger, enabling it to proliferate faster or cause more infections. …
… Aparna Mukherjee, a scientist at the Indian Council of Medical Research …
… In some districts in Maharashtra state — home to Mumbai and epicenter of the current wave that’s triggered fresh lockdown-like rules — the prevalence of this variant was more than 60%, according to Anurag Agrawal, director of the state-run Council of Scientific and Industrial Research’s genomics institute that’s conducting sequencing. …
… Both mutations are known to decrease — although not completely eliminate — the binding of the antibodies created by infection and vaccination, according to Jesse Bloom, an associate professor for genome sciences and microbiology at the University of Washington.
“Mutations at sites E484 and L452 have been observed separately, but this is the first major viral lineage that combines the two,” …
… Rakesh Mishra, the Hyderabad-based director of the Centre for Cellular and Molecular Biology …
… William A. Haseltine, a former professor at Harvard Medical School …

Coronavirus: ‘Double mutant’ Covid variant found in India (25/03/2021) | @BBCNewsAsia
… The Indian SARS-CoV-2 Consortium on Genomics (INSACOG), a group of 10 national laboratories under India’s health ministry …
Are double mutants a worry?
… But if the virus can use reinfection to spread, then it would be “penetrating” herd immunity, says Dr Jeremy Kamil, a virologist at Louisiana State University Health Sciences Center Shreveport. (Herd immunity happens when a large portion of a community becomes immune to a disease through vaccination or through the mass spread of the disease.) …

Q+A: Indian coronavirus variant – what is it and what effect will it have? (04/21/2021) | @ConversationEDU
Is this variant more infectious?
We think this variant may be able to spread more easily than earlier forms of the virus. This is because of a mutation it carries called L452R, which affects the virus’s spike protein. This is the “key” the coronavirus uses to unlock our cells.
The L452R mutation changes the part of the spike protein that directly interacts with ACE2, the molecule on the surface of our cells that the virus binds with to get inside. Early research – yet to be reviewed by other scientists – suggests the L452R mutation allows the virus to bind to cells more stably. In previous variants, such as the Kent variant, mutations like this that enhanced the virus’s binding ability resulted in it becoming more infectious.
The B1427 variant detected in California contains the same L452R mutation a B1617. It is estimated to be around 20% more transmissible than the earlier form of the coronavirus that was circulating during the first wave.
And is it more dangerous?
Mutations such as L452R that help with binding don’t necessarily result in more severe disease or make the virus more deadly. …
… Indeed, preliminary studies suggest the L452R mutation could help the virus evade the immune system. On top of this, B1617 carries a second mutation, called E484Q, that changes the spike protein as well. Research suggests that mutations like it (that affect the same area of the spike protein) may also make the virus less susceptible to pre-existing antibodies. …

COVID-19: Indian double mutation variant arrives in Britain and has ‘hallmarks of very dangerous virus’ (19/04/2021) | @SkyNews
… The variant – officially named B.1.617 – is almost certainly playing a part in the very sharp spike in the epidemic in India.
… One of the concerning mutations, called L452R, is also found in a variant circulating in California, though there is no link between the viruses. The Indian variant has evolved independently.
The other mutation in the virus is completely new. It is at the same ‘484’ position in the spike protein that is also mutated in the South African variant, and some others. But the actual mutation – E484Q – is slightly different.
Lab tests show both mutations help the virus to infect human cells and evade some antibodies.
The combination – called a double mutant – is a particular concern.
As yet it is unknown what impact they would have on the effectiveness of the existing vaccines. …

First case of ‘double mutant’ COVID-19 variant confirmed in Quebec (04/22/2021) | @CTVNews
… It’s known as the “double mutant” because it contains two distinct mutations of the original COVID-19 virus. Each of those mutations has been seen in other variants, separately, but this variant has both at once. …

India’s COVID-19 Variant: What We Know So Far – Not yet clear how much the current surge is driven by this new variant (04/29/2021) | @medpagetoday
Why “Double Mutant”?
Its official name is B.1.617, and the “double mutant” is a bit of a misnomer, because it actually carries 13 mutations, 7 of which are in the spike protein. But the moniker comes from two notable mutations found in other variants that appeared together for the first time in this new strain: the L452R mutation and the E484Q mutation.
The L452R mutation in the spike protein was first found in the COVID-19 variant detected in California. One study found that the California variant carrying this mutation may be up to 20% more transmissible than wild-type strains.
The E484Q mutation is notable because it appears to be very similar to the E484K mutations found in the B.1.351 (South African) and P.1 (Brazilian) variants. The E484K mutation in these variants is considered an “escape mutation” because it enables SARS-CoV-2 to evade immune protection with monoclonal antibodies, which may decrease the effectiveness of vaccines. So far, though, current vaccines appear to be holding up against these variants, according to Jetelina.
Why Is the ‘India’ Variant Important?
… Back in December 2020, 271 million people (about one-fifth of India’s population) were already infected with COVID-19. Modelling studies suggested that India may have already reached herd immunity through natural infection. India’s health minister announced that the country had successfully contained the spread of the virus. …
Implications for Pandemic Control
… Preliminary evidence so far suggests that the Covaxin vaccine is still protective against the double mutant variant. Covaxin is an inactivated vaccine that contains killed coronavirus material and is made in India. Scientists in India have also reported that Covishield, which uses the same biotechnology as the AstraZeneca vaccine, has efficacy against the mutant.
… “The more this virus jumps from person-to-person (regardless of where it’s at in the globe), the more chances it has to mutate,” she wrote. “The more it mutates, the more chances it has to outsmart our vaccines.”

The Recent Rise of Indian Covid-19 Cases Display The Dangers Of SARS-CoV-2 Variants (04/23/2021) | @Forbes
… In addition to the B.1.617, which I described in detail in a previous article, a number of strains with additional mutations are also circulating that are currently less prevalent, but still cause for concern. These mutations, which are heavily concentrated in the N-terminal and receptor-binding domains of the spike protein, likely make their respective variants more resistant to convalescent sera and vaccine-administered antibodies.
Among these mutations is W152L, located in the N-terminal domain, which is thought to be a neutralizing antibody binding site due to its high antigenicity. Mutations to this area could reduce neutralization capability and make the virus more resistant to convalescent sera and vaccines. Another mutation, V382L, is also located in the receptor-binding domain. …
Further mutations found in India include N450K, which is also found in the Belgian B.1.214 variant; S477N, which is also seen in the New York B.1.526 variant; and a series of others, all heavily concentrated in the receptor-binding domain. Mutations to this region affect both binding to human ACE2 receptors and potential resistance to neutralization. …

Science Brief: Emerging SARS-CoV-2 Variants (Updated 01/28/2021) | @CDCgov
India’s massive COVID surge puzzles scientists – The virus is spreading faster than ever before in India despite previous high infection rates in megacities, which should have conferred some protection. (21/04/2021) | @nature