Here is just a part of articles/videos concerning the Brexit on Twitter on 6 June (BST). 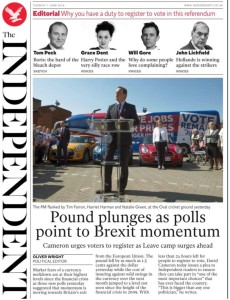 – Cameron urges voters to register as Leave camp surges ahead –

Brexit would not make £8bn available for the NHS | @TheIFS 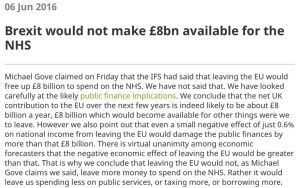 Farage: Brexit Would Be ‘First Domino’ In Disintegration Of EU | @BreitbartLondon

Pro-EU MPs could stage guerrilla campaign to reverse Brexit decision | @patrickwintour
– MPs could initiate ‘reverse Maastricht’ to minimise number of EU laws the UK pulls out of, or push for a second referendum –

Will the UK leave the EU? Keeping track of the polls, bookmaker odds, and the financial markets |‏@Pete_Spence

Brexit Lords have a cheek to complain about EU democracy | @nick_clegg
– It is ridiculous for a group of unelected British peers to criticise the lack of accountability of EU institutions –
[Excerpt] …With more than 800 members, the House of Lords is only second to China’s National People’s Congress in size and is about as undemocratic: unique in Europe, its members can revise and amend the laws of the land without anyone actually being elected…
Yet this obvious inconsistency appears to have escaped Lord Lawson et al when they berate the EU as “profoundly undemocratic”. I find what they do every day in the House of Lords profoundly undemocratic too.
Similarly, Boris Johnson, Michael Gove, Chris Grayling and the other Brexit ministers appear to be entirely untroubled that they serve in a Government that garnered no more than 24 per cent of the eligible vote…
… It took the EU almost 30 years, for instance, to agree a common definition of chocolate … A body that takes three decades to define chocolate can be described as many things — not least slow and bureaucratic — but an undemocratic conspiracy is hardly one of them…

Conservatives will stand up for Britain if the EU lets us down | @SteveBakerHW
[Excerpt] …David Cameron has been spectacularly successful in Europe. No other Prime Minister has secured a cut in the European Union budget.

Brexit and the union: Tug of war | @TheEconomist
– Brexit could lead to a second Scottish independence referendum. But the place to fret about most is Northern Ireland –
[Excerpt] …Remainers have tried to use the Scottish card to strengthen their hand in England by warning that Brexit would trigger a second independence referendum which…a resurgent Scottish Nationalist Party (SNP) might win…
…a month ago it lost its overall majority in the Scottish parliament… And even if she were able to call a second referendum, Ms Sturgeon cannot risk it… The example of Quebec suggests that two lost votes…for decades…
…Oil prices are half as high as then, so an independent Scotland would face even bigger economic and fiscal difficulties. After Brexit, the EU might be more welcoming to a Scotland seeking membership, but it would still object to its keeping the pound instead of adopting the euro. And if a post-Brexit United Kingdom ended free movement of people from the EU, that might mean erecting a border between north and south…
…Farming matters more in Northern Ireland than on the mainland, and it depends more on EU subsidies. Links to Ireland are crucial: it takes 34% of Northern Irish exports…
Ireland is the EU country most worried about Brexit. Irish ministers regularly state their opposition… Britain is Ireland’s biggest export market, and… Dublin to London is the world’s second-busiest international air route…